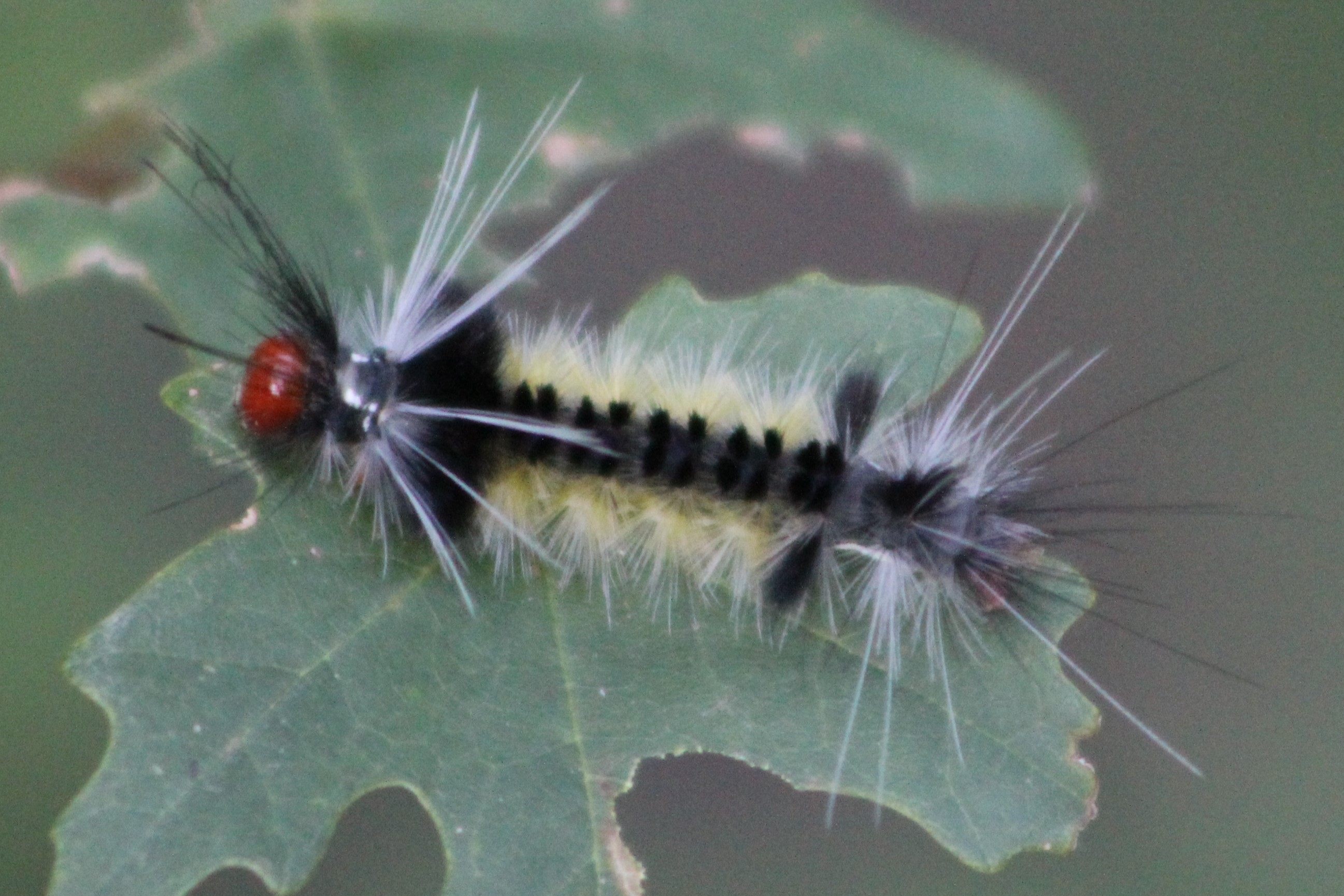 Life brings little pleasures! The other day, Eileen and I took a hike up into Miller Canyon looking for birds. We arrived shortly after sunrise and trekked up to a portion of the canyon that had nice, tall trees, a mixture of oak, maple, cottonwood, sycamore, and pines. The perfect habitat for any number of bird species. We did not see or hear a one. We did spy a lot of small very distinctive, colorful caterpillar. Offhandedly, I took a quick picture so I could place a name on this creature. Several days later, I took the time to root through bugguide.net to learn this caterpillar’s identity. After checking numerous pages, I finally found a perfect match, I had identified this caterpillar as a Carales arizonensis caterpillar. For those of you who need a common name, sorry, there is no accepted common name, though some sources call it the Arizona tiger moth. Why doesn’t this species have a common name? Because it is an insect that is restricted to only a few places on this earth.

As you will see later, it was first found in the Huachuca Mountains where Miller Canyon is and has been reported from Cave Creek Canyon in the Chiricahua Mountains and maybe the Santa Rita Mountains of Arizona. That appears to be it!

These mountains are Sky Islands, mountains, lush with life, which rise up from the unforgiving desert. Anyone who understands island ecology knows that islands are hot spots for species diversification (think Hawaiian or the Galapagos Islands). An animal separated from other individuals can eventually evolve into a separate species as this moth exemplifies.

When I first saw this caterpillar, I found its coloration and hairiness fascinating. Usually, caterpillars are cryptically colored to blend in with their background. Not this one. Bright colors usually advertise a poisonous or at least

distasteful insect. Also, the hairs on a caterpillar can serve multiple purposes. First, it might just discourage parasitic wasps from depositing eggs on the caterpillar. More like, the hairs are there to discourage birds from feasting. It is possible the hairs are urticating hairs, little barbed ended hairs that dislodge from the caterpillar really easily and lodge tenaciously into whatever touched the caterpillar. Sometimes these hairs even contain poison. Most birds avoid hairy caterpillars for that reason. When I first looked at this caterpillar, it seems to scream, “Leave me alone. Touch at your own peril.” I heeded the message and did not touch it.

Here, a simple trip up into the mountains to see unusual birds ends up with us finding an unusual insect instead. So cool!

Then, my curiosity got the better of my commonsense. I wanted to know more, a lot more about this creature, so I dug deeper into the internet. Below, I explore in detail what I learned. If you are happy with knowing about my fun day, read no further. If you thirst for information like I do and don’t mind dry text, read on.

I started my search with Wikipedia as often they provide great links to real trustworthy information. Wikipedia gave Carales arizonensis just 32 words.[1] What I could glean from that parsimonious listing included the moth was first described by “Rothchild, 1909” and the caterpillar specialized on eating bigtoothed maple (Acer grandidentatum) leaves—period.

The page included a link to Rothchild’s Wikipedia page. One click and I learned about Walter Rothchild, 2nd Baron Rothchild, an inveterate collector in Britain, who never set foot in the United States. He created a collection of animals larger than any other private individual. In his collection it is reported that he had 2,250,000 butterflies.[2] Obviously, he did not collect this creature, so who did?

One of the three sources provided by Wikipedia was a “project” by Markku Savela in Sweden. He put together an impressive collection of “Lepidoptera and some other life forms.”[3] Savela dove deep into original images and descriptions of lepidopterans and offered links to the sources of his information–a real treasures trove. Here, I found a link to Rothchild’s description of an insect he called Opharus astur arizonensis, a subspecies of a far more common moth. With the name and description, it also said, “”Hab. Huachuca Mts. Arizona, August 1903 (Oslar).”[4] Now, who the heck was “Oslar?”

Trying Oslar as a search criteria, I found thousands of pages for “solar.” So I tried Oslar, Entomologist, and found Ernest J. Oslar, the first entomology curator for the Colorado Museum of Natural History (currently the Denver Museum of Nature & Science). Oscar apparently left the museum in 1911 after they refused to pay for his collection of 10,000 butterflies. I bet there is a story there.  Fortunately, Dr. James A. Scott already wrote about Oslar in 1972 in a document called Ernest J. Oslar, 1858-1944: His Travel and Collection Itinerary, And His Butterflies.[5]

From this original source I learned that Ernest Oslar was employed by Rothchild to provide specimens, shipping “15,812 (by Oslar’s count) Colorado, Arizona, New Mexico, and northern Mexico moths and butterflies to Rothchild.” In his travels, Oslar reported collecting in the Huachuca Mountains of Arizona in 1903. I love this Scott quote and anyone who has spent time in the Arizona desert will relate. “By 1903 he had expanded the area to the southern desert areas including Yuma and Phoenix, Arizona, which he noted in correspondence were the hottest places in the U.S. and only fit for cacti and rattlesnakes, where a man without a gallon canteen of water would soon shrivel and burn up like the vegetation.”

So after a little research, I knew—how, where, and by whom this species of moth was “discovered” and described. My next question. How common is this moth? I searched for location references.

In September 1910, William Barnes and J. McDunnough wrote “New species and Varieties of North American Lepidoptera” in the Journal of the New York Entomological society and mentioned a new variety “worthy of being named” based upon specimens found in Palmerlee, AZ (I learned this is a ghost town now known as Carr Reef in Carr Canyon in the Huachuca Mountains a place Eileen and I visited recently), and Huachuca Mts., AZ, as collected by Barnes between July 8 and 15,” presumably 1910 and they called it Opharus (Phaegoptera) astur fumata.[6]

The next reference I could find was not until the March/April 1981 edition of the “News of the Lepidopterist’s Society” This insect was still a subspecies with the name Phaegoptera astur arizonensis and was found in South Fork Canyon in the Chiricahua Mountains of Arizona, a new location.[7]

I do not find another mention of this species until 1980 in the “Revised checklist of tiger moths of the Continental United States and Canada.”[8] By the time of this checklist, the moth had risen to species status and received its current name. When I checked out this species on The North American Moth Photographers Group web page, it listed only two counties from which images of this moth have been published, Cochise County, AZ (where the Huachuca and Chiricahua Mountains are found), and Pima County, AZ, most likely the Santa Rita Mountains.[9] Obviously, this moth has a very restricted distribution!

Was I done knowing everything I could about this highly restricted species? No!

As I dug deeper and deeper into the reference pages I ran across mostly lists that included this species. Then I found a 2013 article in phy.org written by Celia Spell called “Toxic tiger moth: Researchers study evolutionary arms race.” In the summer of 2013, Wake Forest graduate student, Nick Dowdy and his biology professor, Bill Conner studied a unique feature of the moth Carales arizonensis. To warn bats not to eat its toxic flesh, this moth makes a clicking sound. As part of his research, Dowdy videotaped bats avoiding the moths.[10] I remember reading about this a couple years ago. Now the story has come full circle. What a pleasure.