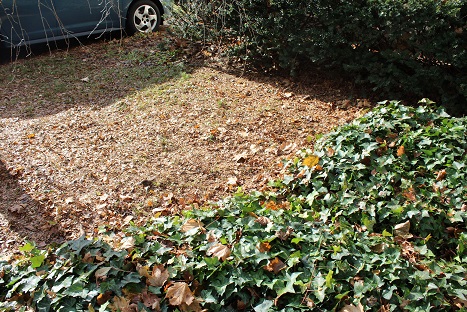 Tomorrow is yard waste pick up day for my community, the last of three pick up dates. For the last couple days our hearing has been assaulted by the many leaf blowers pressed into service to gather the remaining leaves. Yesterday, my neighbors and I addressed the leaves in our yards. The two neighbors across the street with their bigger yards put out about 20 bags of leaves each. I put out the remnants of the mulberry tree stump cut into 42 pieces, three bundles of sticks, and a single bag of smaller chunks of wood and dead flower pot remains—no leaves. Instead, all my leaves were chopped up with the electric mulching lawn mower and many of the little pieces went under the bushes in the front of the house. Some were collected and put around the roses and other bushes in the yard. A significant portion stayed on the lawn so that the invertebrates, bacteria and fungi could return all those wonderful nutrients to the soil.

For years, while we had a vegetable garden, I would gather bags of chopped leaves and dump them in the garden. Come spring, I would shovel the leaves into the soil and a prepared my beds. Over the years, the soil converted from poor clay to a nice rich loam. Now that we only have perennials, I no longer take that step.

Our community only picks up yard waste in the fall. Our yard has so many plants our compost bin cannot keep up with the amount. So, I collect much of my yard waste throughout the year. Earlier in the season, I put out three bags of garden waste that I had collected saved. Instead of going directly to the landfill, this material will be composted commercially.

As I do the work, I remember two of my early ecological lessons as a youngster.

Starting when my brother and I were at a young age, my father would conscript us to rake the leaves in our large yard with its many mature trees. Often we were whining, complaining and lollygagging. The neighbor would rake his to the edge of the road and then light the mass on fire. How I loved that smell. My father insisted we rake the leaves under the extensive copse of yew bushes. We considered this task as a waste of time when burning is so neat. My father was a patient, yet persistent man.

Mark Twain once said, “When I was a boy of 14, my father was so ignorant I could hardly stand to have the old man around. But when I got to be 21, I was astonished at how much the old man had learned in seven years.”[1] While I never thought my father ignorant, I could not understand why he would not burn all those leaves.

In my late teen years, with a nascent ecological awareness, I received the lesson that made my father’s behavior seem logical. My grandfather on my mother’s side was a gardener, not just an amateur, but a professional. One day, while he visited, he groomed the geraniums. He would pick off the dead leaves and pulverize them between his fingers and returning the debris to the pot. He offhandedly mentioned that the leaves contained all the nutrients the plant had pulled from the soil and they needed it back. This was not a lecture, it was not an intended lesson, just an offhand remark, but how it resonated. What I also realized is that a whole leaf does not break down rapidly. But once cut or crumbles, the increased surface area allows the natural process to proceed much faster. Invertebrates, bacteria and fungi can attack the edges and decompose the material quickly.

As my ecological understanding grew, by the time I was 21, I realized how wise my father was. Instead of pumping all those leaf nutrients into the atmosphere, he was returning them to the soil.

These two lessons still govern my behavior and treatment of leaves on my lawn. I grind them up and leaf them there.

6 thoughts on “Leaf Them There”