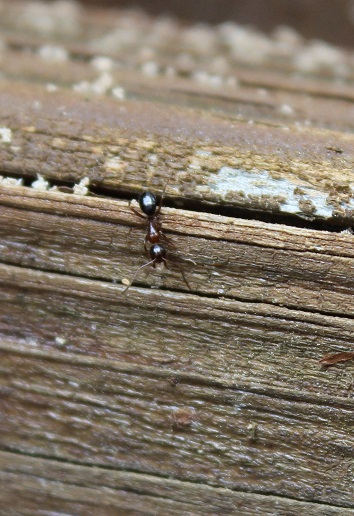 The other morning while I sat on my deck, I noticed a small dusting of sawdust. “Looks like the carpenter bees are digging into the deck again,” I said to Eileen. So, I looked all around the area above the pile and found no hole.

While exploring, I did notice a single ant moving about within the zone of dust. I suspect the ant is a species within the genus Formica but I am not skilled or patient enough to know ant identification. AS I watched, the ant picked up a dust crumb carried it over to the edge of the board and flung it off. The ant returned to the pile, grabbed another crumb and repeated the behavior. From the shape of the sawdust scattered on the board, I could tell the ant had already cleaned off a portion before I started my observations.

At one point, I took out the stopwatch and recorded the ant making about six trips per minute, dropping off a new piece every ten seconds, rather a rapid pace. The selection of pieces seemed random as the ant rarely returned to the same general location after it dropped each particle. It even would travel over some sawdust before selecting the next piece. On several occasions, the ant picked up two pieces, but this happened rarely.

I watched for an hour, the time it took the ant to clear the board. Then the ant disappeared for a few minutes. After a several minute lag, an ant appeared, picked up a dust crumb carried to the edge and dropped it. After dropping a single particle, the ant wandered away again.

During my observation period, several other ants meandered through the sawdust zone. None stopped to help. One of these ants bumped into the busy ant. Usually ants meet face to face and communicate through sharing food and odors. This interaction appeared more accidental as the new ant touched the original ant’s rear as it passed. The original ant reacted like it had been jabbed with a poker, running away, randomly scurrying about the boards, even climbing up about six inched onto one of the vertical portions of the deck. The intruder did not miss a beat and just kept walking away. Within seconds the original ant returned to his task.

Another time, a sowbug (Oniscus spp.) passed the ant who appeared to chase the sowbug for a short distance before returning to the job at hand.

The source of my confusion is the question, “Why?” The ant’s behavior would make sense if the ant were cleaning out a nest. During the nest building process, middle aged ants carry particles of sand and dirt out and deposit the material around the periphery of the nest hole, hence the ant mounds we see so often. Numerous individuals carry on that work. Here I have a single ant, nowhere near a nest, behaving like it is cleaning out the nest. This ant’s behavior conveys no visible advantage to the colony. The material is obviously being treated as waste as opposed to collected for food. Furthermore, neither of the two other ants of the same species that came into the area made any effort to help of even to acknowledge the worker.

I am inclined to speculate, but can provide no concrete answers. I hypothesize that

this ant either carries a parasite or fungus causing it to behave irrationally. The ant carries on a programmed behavior—debris removal, not in a nest, but out in the open. A number of parasites or fungi can infect invertebrates and change their behavior. By moving about in a very visible, open area, could something be manipulating this ant so that the ant becomes easy prey, thus moving the parasite or fungi to a new host?

Another possibility might be this individual carries a genetic flaw. Ant behavior is hard wired, genetic. They instinctively perform the functions based upon their age and position in the colony. My ant performs a very specific task—remove debris –but not from the nest. Why would only a single individual have a genetic flaw since most ants in a nest are sisters?

Maybe another hypothesis better explains my observation. My simple brain cannot imagine one though.

To add to the confusion, the sawdust continues to accumulate, but it must be coming from somewhere other than my deck as particles appear in webs and on leaves high up on the deck, above any location that could be accessed by a carpenter bee.

Despite pondering for hours, I am still confused about both observations. So much is still unknown about life on this Earth. I learned in my youth that a good naturalist asks questions. Once a question arises and a hypothesis created, testing can provide an answer. Since I do not have the sophisticated equipment to test the ant’s make-up, I just need to leave the question unanswered. Some day I hope that the answer will present itself. If it does, I will be ready to make the connection.

3 thoughts on “I am so confused”