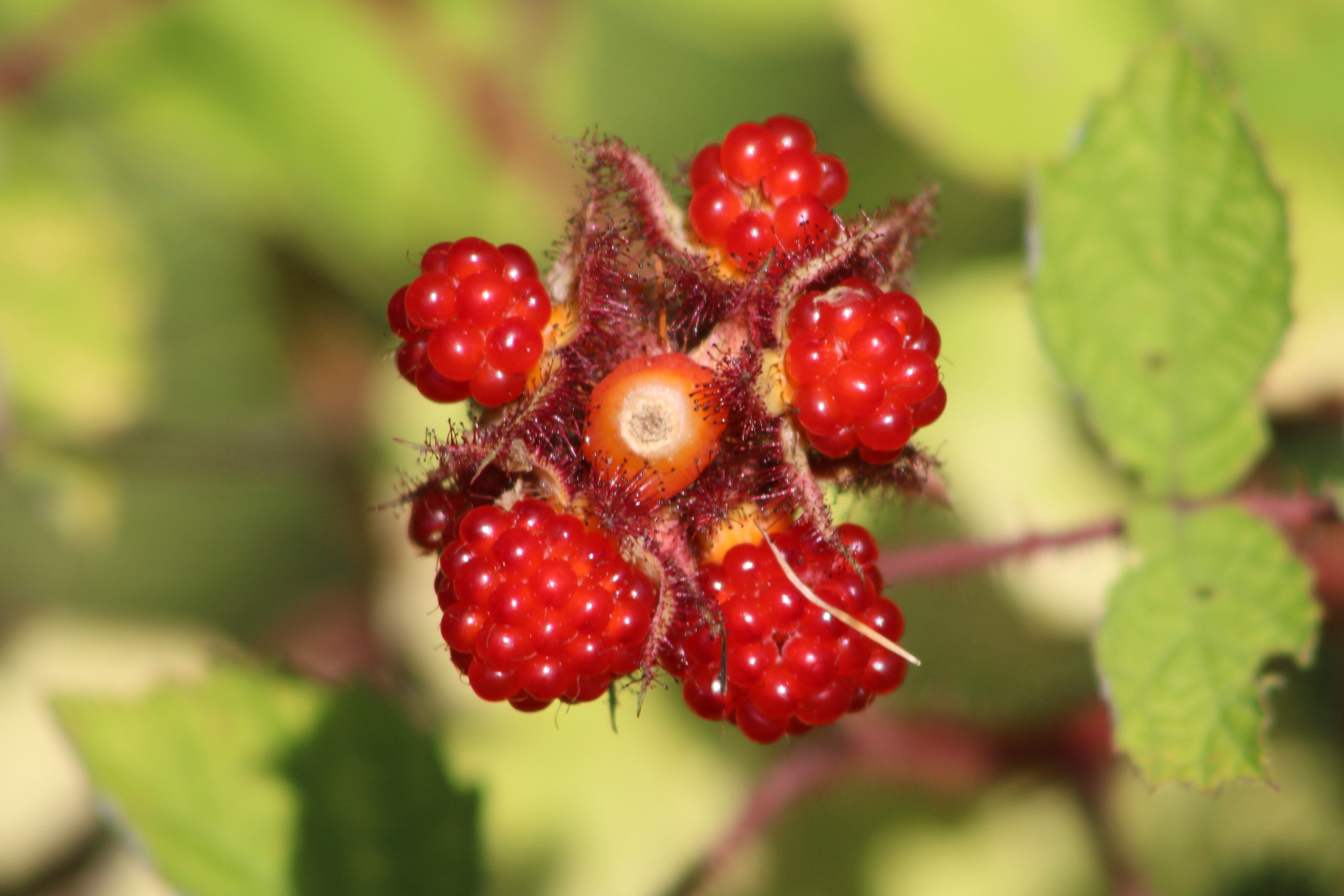 y yard, I noticed the wineberries (Rubus phoenicolasius Maxim.) were about to ripen. In fact, several of them had been eaten. Wineberries are a non-native and invasive species. They produce a raspberry-type fruit relished by the birds, who then spread the seeds. Concerned that the plants might spread, I put up a bird barrier all around the small plot. Understand I did this to save the local environment. I will not let the birds eat the hundreds of berries about to ripen. If I did they would spread the seeds hither and yon. It is far better that I protect the plants so only I can access and consume the berries. Remember, this is not a selfish act, but one to protect the environment. Of course, the fact that I really enjoy the sweet/tart flavor of wineberries has little bearing on my actions.

Shortly after moving in years ago, Eileen and I noticed a small bush covered with reddish prickles and tart red berries—wineberry. This highly invasive, native to China, Japan, and Korea, a relative of blackberries and raspberries, produces a delightfully delicious berry loved by birds, other animals, and me. Whenever I spent time on the trail, I forage for wineberries like a bear, backing my way into the thorny mass, using my hips, legs, and butt to part the branches so I can reach in far enough to pluck out enough berries to satiate my taste. Sometimes I even share. This and the mosquitoes may explain why I rarely wear shorts.

Usually I rip out an invasive plant, especially one so invasive, but for my wineberries I make an exception!

I am not the only one who likes the wineberries. One day, I watched three catbirds try to gain access to the wineberries. Two birds hop along the ground checking out the berries, scanning the mesh, flying against it, looking again. The third sits on the top trying to get in. It jumps off its perch and lands on the screen. Worried it might get its feet caught, I go outside and they all leave. Most mornings, I see gray catbirds checking out the wineberries and exploring the mesh. Almost every year, a catbird finds a weakness in my system and spends at least some time within the cage. I then go out and lift the screening and let the bird out. This year, as I approached, the bird managed to wiggle out of the overlapping mesh on the top—crafty little devils.

rgy is the currency of the natural world. All living creatures need to consume more energy than they burn. These catbirds seeing a potential food source, were doing their best to access it, but it eluded them. How much time and energy should they expend?  If they were automatons reacting to a stimulus with no consciousness, they would continue to try, wasting precious energy. In actuality, during the morning, the catbirds lost interest and I rarely saw one later in the day. Somehow, they know or at least figured out not to attempt to reach the berries behind the screen any longer. I am convinced that birds learn and remember.

Numerous studies demonstrate how some bird remembers where food is hidden, what predators are in the neighborhood, and how some birds even remember faces. I would assume that they would also learn when something looks like food, but isn’t. For example, a bird that eats a monarch butterfly gets sick and will not do that again. Can the catbirds “learn” that while there appeared to be food nearby, it was inaccessible and not worth the expenditure of energy to attempt to retrieve?

A report in Bents Life History of Birds tells of a test one observer made on a gray catbird and an eastern phoebe. The researcher found a gray catbird nest and an eastern phoebe nest and covered the nestlings with a cloth. The eastern phoebe mother looked at the cloth reached down, whipped it off her nestlings, and returned to brooding. The female gray catbird explored the nest from multiple angles but could not figure out what was happening or what she could do. The gray catbird mother after exploring the nest would leave to feed, come back and check it out, and leave again. Each time it returned, it spent less time at the nest and more time away from the nest. Fearing for the survival of the young, the researcher removed the cloth and the mother gray catbird sat down and brooded as if nothing had happened. One might speculate that a catbird responds to very specific stimuli—feed baby when seen; If there are no baby, feed self. The description of the gray catbird investigating and exploring the covered nest, but not understanding, sounded similar to my birds frustrated by the wineberry mesh. They checked it out from all angles, would drift away only to return later and try again. The implication of the study was that the gray catbird was not an adaptable species, yet they seem to have adapted to the human presence as they are one of the most numerous species in our area.

For the next several mornings, I see the gray catbirds trying to access the wineberries. As long as there is an abundance of ripe berries, they cannot resist making an effort.

Despite all of the studies that demonstrate a bird’s capacity to learn, it is remarkable how preprogrammed and inflexible a bird can be.